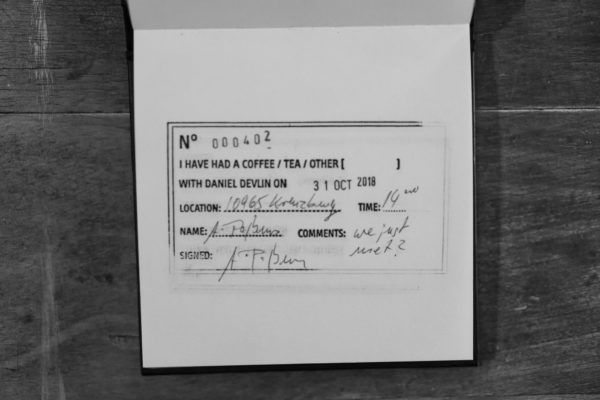 Andreas is a friend of Kaz and I know Kaz because he is a friend of Charlie’s and I know Charlie because we were at university together. Kaz came to Susak expo 2018 together with Charlie and programmed the Susak expo website (www.susakexpo.com). Kaz has also made my other website all linked to susakpress.com so you are probably reading this text in one of those sites.

Anyway, Kaz is half Lebanese and half American based in France, he is a web genius and an extremely nice guy, I haven’t know him for long but I do think of him as a friend, a good friend.

So. I asked him if he knew anybody in Berlin who would like to meet me for coffee and he said, as a matter of fact, there was, Andreas and Kaz have know each other for years, from when they both  lived in Austin. (Kaz studied there but I’m not sure if Andreas and Kaz studied together), he’s a graphic designer.

We arranged to meet at Mehringdamm. There were several exits and I took the exit that took me outside a Felafel shop. It was slightly cold and I realised that I had lost my hat, it was a wooly hat my mum knitted for me, horizontal strips of different colours. I thought it looked quite cool although I once took it to JazzLive at the Crypt and asked Russell if he thought it was a cool hat and he honestly told me that it was very uncool so not sure what to think. Anyhow, I lost it so, cool or not cool is of no practical importance.

Andreas phones me asking where I am, I tell him that I am on the felafel side of the road, it’s a huge multi-lane road so he was quite far away but I think I see someone I think could be him “What Felafel shop?”

“I can see you! look at the other side of the road slightly to your left”

He sees me, waves and says to wait where I am and he’ll come to me.

I haven’t had lunch yet, it’s about 2PM and I’m quite hungry. He’s already had lunch, he thought we were meeting for coffee, we were, but I’m hungry. I get a felafel from the felafel shop, he gets a couple of sour drinking yogurts (one for me) and I’ll eat the felafel as we walk to his place.

We stop and sit on a small wall. “You know, this idea of meeting random people has been done before”

He told me that this was the second time he met somebody he didn’t know as part of an art project (I’m not sure my project is art, but this has more to do with my continuous self doubting, continuous futile questioning of what is art, what is the point anyway, does it have meaning? really? It’s only fucking art. Is it art? anyway, I thought better to not mention all this and we could carry on assuming my coffee meeting project is art – not saying good art – in the same way that Andreas first meeting with a stranger art project was art too).

A friend in NY spotted a sticky note in a magazine that mentioned: Dinner with me? And a phone number. She was surprised and called. As the guy was in the south at that time my friend recommended seeing me instead. So we had dinner: a bbq at my place with friends. Well here is a pic of the dude: 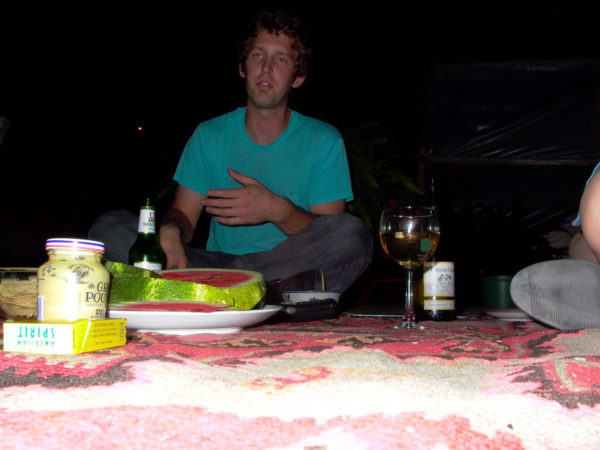 If anybody recognises him, please let me know. it would be great to get in touch with him and maybe have a coffee with him. [The Artist’s name is Mark Horowitz]

OK. please bear in mind that I’m writing this from memory a week or two after the meeting so I might (will) get things wrong. But they are what I remember. I will ask Andrea to read this text and let me know if I got things wrong.

Maybe 20 years ago, in New York, a friend of Andreas saw an ad on a paper saying something like this: “Would you like to have dinner with me? I am an artist, as part of my art project I would like to have dinner with strangers. You choose the restaurant and you pay for it, it’s only fair as I have to pay to get to it. If you’re interested, here’s my number …”

OK, he got the idea before me but in my project, I pay for the coffees.

the artist has to cancel the meeting, he is so sorry but he won’t be in New York, he has to be in California. Andreas’ friend says, no worries, but I do have a friend in California (Andreas) maybe you can meet him instead?

I can’t remember Andreas telling me about the actual meeting, where it was. What happened. He can’t remember the name of the artist and has now way of contacting him. It would be great to find out more about that project, how it went, was there any documentation? Andreas said that he didn’t take any photos. I like the idea of not documenting the event, although in my case, I take photos and try to recount it, it gives it more purity, it really is about the moment, it is genuinely about meeting strangers and nothing else. But maybe that’s giving the project too much importance, this project is so amazing, it just needs to exist as unwritten and undocumented concept … but they do keep on living, as anecdotes, the stories, all the dining partners most probably keep on telling their stories of meeting an artist for dinner after answering an ad on the newspaper. Andreas, do you often tell the story of this meeting?

Or was it a scam, a way to get free meals, sometimes in fancy restaurants? I like to believe that it was genuine and would really like to find out who the artist was, more about the project and maybe meet him (I think Andreas said it was a he) for coffee sometime.

We get to Andreas’ flat and he makes me coffee. In a Moka stove top machine but adds cardamon seeds on top. It was delicious, really, I will start this.

I think he is about my age, he is recently divorced, has two kids, roughly the age of Klara and Emil, he loves them lots and sees them regularly.

His flat is really cool, he has a large collection of Vinyl, he asks me what I would like to listen, I said Jazz or some blues, he puts on a John Coltrane album, which one was it? Andreas, do you remember.

He showed me animations made by his friend Frankie, absurdist animations with penises, I think that he should meet up with Carousel, somehow I think that they would like each others work. I asked him if he knew anybody I could meet for coffee and he suggested Frankie and also a transvestite artist who was performing that Friday. He phoned Frankie who said that he was up for meeting me, maybe we could meet on Friday afternoon / evening and then go together to the Tranny’s performance. Unfortunately I wasn’t able to meet Frankie nor go to the performance. That Friday I was going to have dinner with Jake and couldn’t make it.

He told me that Kaz was looking for a car and that he found a good one cheaply and will buy it for him and drive it down. He also told me about his friend who collects fold out fibre.

We were sitting on the balcony, the day was sunny but it was getting cold. Now it’s now been a month since that day and my memory is letting me down a little. We have met since and I have now met his girlfriend, Daniela, his two kids and and Daniela’s daughter as they came to the show at the Kühlhaus.

Anyway, I’ll try and get back to that first meeting. He told me about a couple of interesting projects: He told me about Tetrodons, expandable fibreglass prefab housing from the 60s or 70s, he knows someone who collects them and has been helping him collect them. He showed me photos and they were great. He was thinking about maybe buying one and putting it on a roof in Berlin.

Also, he told me about an artist who has invented a fake chocolate museum in a village in France, the whole town is in on it, there are signs leading to the museum which doesn’t exist.

Anyway, I had to go. I told him that I had lost my hat and he gifted me one. 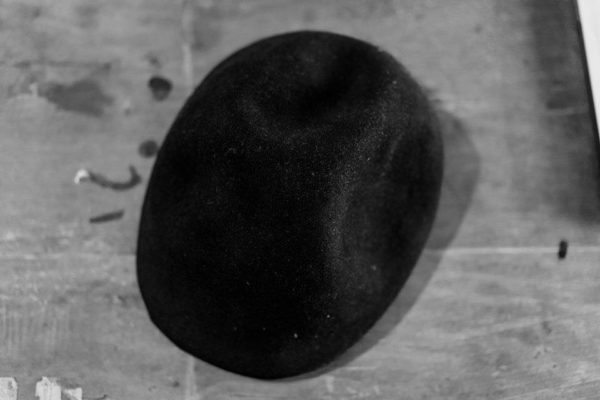