My friend Clara and I were on the same MA in 2006 (Chelsea), we had lost touch a little bit (Clara went back to live in Germany before returning to London) but recently we have been bumping into each other almost regularly and Clara took part in Susak expo 2018.

When I told her that I was looking for people to meet for coffee in Berlin and she contacted her friend Maria.

I was slightly late for the appointment. It would have been OK, I was waiting for the bus number (I can’t remember which number but it was one that would take me quickly to where we would meet). I’m not sure why but I saw a bus going in the opposite direction and decided to take it, I cross the road dangerously, reach the bus and press the button on the back door. The back door does a bit of movement but doesn’t open. I keep pressing the button and the door does a bit of movement but nothing. people at the bus stop are shouting, the bus driver is shouting, I think they’re saying that I should enter from the front door.

When I get in, the bus driver shouts at me, it sounds like he’s calling me an idiot but I can’t understand why he’s so angry with me (I actually quite enjoy not understanding). When he has calmed down, I make the mistake of saying “wie bitte” and the driver repeats his rant in german, again. He eventually tells me in English that I kept on pressing the emergency button.

Anyway, as soon as the bus drives off, I realise that I am going in the wrong direction.

I eventually get to the café and finally meet Maria who said she didn’t mind waiting. She is an artist from Bogotá (Colombia), I ask her if she knows my friend Natalia (also an artist from Bogotá), she doesn’t. I know it’s unlikely but it’s always worth asking, you never know, it’s a small world and when it happens that they actually know each other [“yes, I know her, we were at school together” or “she was my neighbour”] it’s always very exciting.

I bought two coffees and two pains aux chocolate and gave her one of the stamps I had collected from Jürgen.

Anyway, she’s been living in Germany for over 20 years and is married to a musician. She has a daughteraged 10. She did an MA in Nuremberg called “Art in the Public Sphere” and also another one called “Art in Context” in Berlin. Clara was on the same course, I think in Nuremberg. I think that’s the connection. Anyway, she is now doing a PHD.

Her work is about discrimination. In one of her works she made videos about people being interviewed about their experience of being discriminated.

please bear with me, as during my coffee conversations, I decided not to take notes. I wanted these meetings to not be interviews but real conversation, so I’m now trying to remember as I type. I found her art very interesting and worthwhile, she talked about so many great projects, I might have missed some out, or confused them.

Anyway, she made a series of videos, I think in Brazil, maybe Colombia and Germany about people talking about discrimination. She then showed them  in three different shopping malls in Dresden in order to reach different people.

She also talked about a work which is part of her PHD, in Columbia they celebrate the Day of The Races where they celebrate the mixing of the races, basically Spanish conquistadores committing atrocities towards the indigenous populations, she want to try and stop this national celebration or at least make it more know that this is not right.

Then she gave me one of her works, a print of a black man working in a canteen wearing a shirt with SCHWARZARBEITER printed on it. Scwarzarbeiter literally means black worker and is a pejorative term used for people working illegally. This was a collaboration with the person in question, the print is signed by him and the shirt also has a small flag of the country he came from, I think Angola. I like that touch, there’s a kind of loss of identity when you’re defined as a black worker, but the flag sort of flags the person’s identity.

All quite powerful stuff. That morning I had read about people dodging fares as being referred to as schwarzfahren and we talked about the word black often being used pejoratively.

It was great meeting her, she’s someone I would like to stay in contact with. She said that she thinks there are a couple of people who might want to have a coffee with me. 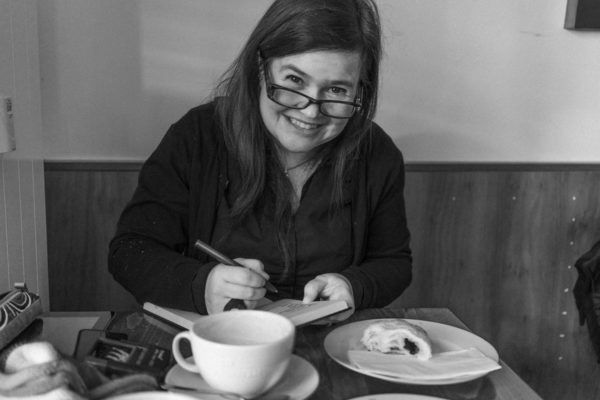 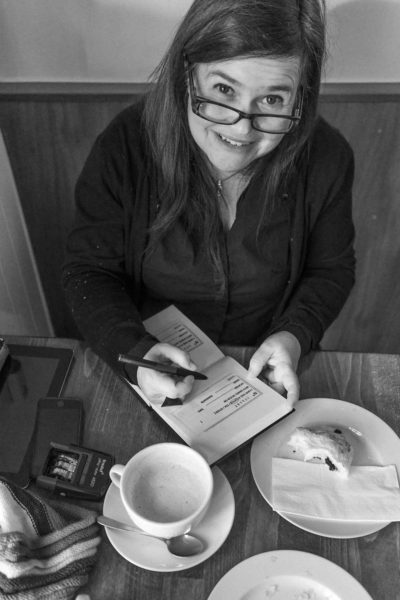 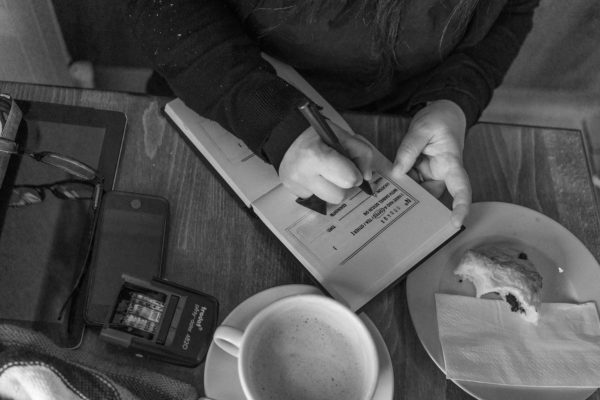 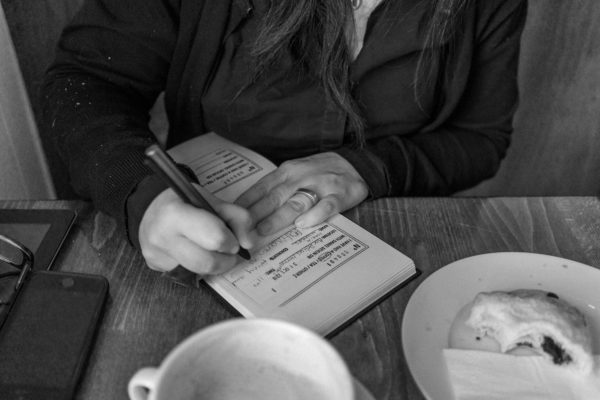 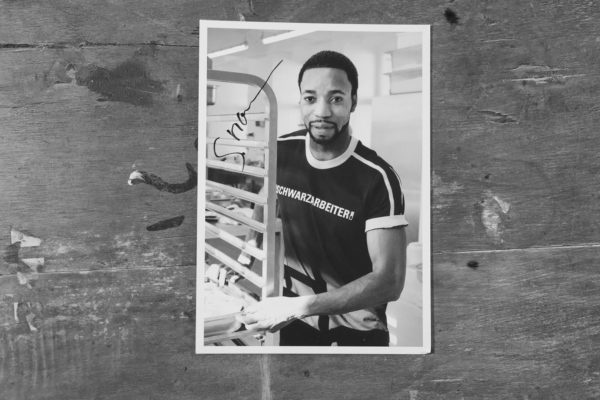