I have been communicating with Jürgen for a while but we hadn’t met in person. I sometimes make stamps (postage stamps) to document my work and after googling around for gummed paper and ways to perforate it, I found Jürgen who has a business printing stamps. My first email to him started “Hi Jürgen, I am so glad you exist.” and his answer started “Hi Daniel,I have to say, I am glad too 😉 without existing, life would be quite boring I think”.

When I found out I was going to be in Berlin, I planned to get some new stamps done and would collect them in person. I would be the first person I would meet so that I would be able to give him one of the stamps and also give them to all the following people I would meet for coffee.

We planned to meet at Cafe Anneliese, Teltower Damm 41 at 10am.

I left Zentrale at around 8am and decided to get a monthly pass for zones A & B (it works out cheap as I would be coming back later that month). I was buying the ticket from a machine and there were so many options I kept on changing my mind. I finally decided to get an off-peak ticket only valid for travel after 10 am, I’m thinking that I most probably wouldn’t be travelling before 10 am anyway.

I get onto the train, I think it was a U6 and start to relax. I look at my ticket and then look at the time, it’s 8:30 am. I Panic, I’m travelling with a ticket which is only valid after 10 am. I think, what are the chances of an inspector coming. Actually what are the chances? I google, are there frequent inspections on Berlin public transport?

Riding without a ticket, or schwarzfahren, is something of a national pastime in Germany, and probably nowhere more so than in Berlin, whose citizenry the reigning mayor, Klaus Wowereit, once famously described as “poor but sexy.”

I learn about schwarzfahren (fare dodgers, literally Black fares), I also find out that the fine is 60 euros and that if you are caught without a ticket, there’s no point arguing as they won’t budge.

In the past month I read a lot of John Le Carré and I have been imagining being a spy in cold war Berlin and all the people I will meet will be like meeting agents in my Berlin network.

I imagine being Alec Leamas, travelling with fake documents, I’ll see how it goes. I was looking out for inspectors and ready to make a quick escape … then all of a sudden, three guys in tracksuits come in, blocking the doors and checking tickets. As soon as I realised they were inspectors, I instinctively wanted to make a dash for it but that wouldn’t work, I then thought of apologising and explaining that the ticket machine was confusing. Eventually, I calmly showed them my invalid ticket, he checked  the valid from and to dates but didn’t notice (or couldn’t be bothered to do anything about it) that the ticket was only valid after 10 am.

All cool. I eventually got to Café Anneliese half an hour early and just relaxed with a coffee.

It was great to meet Jürgen in person, he is a really nice person and with the great sense of humour I expected based on our email exchanges. He works in IT and does this stamps printing as a sideline. He creates his own stamps for invented micro nations. He is a true artist.

He gave me the stamps I ordered and I paid him. He said that he had a friend he would like me to meet. 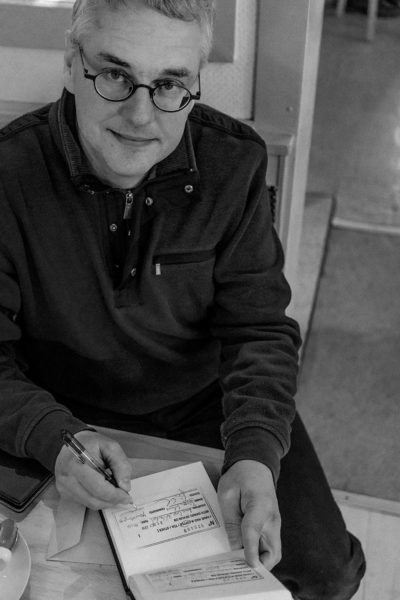 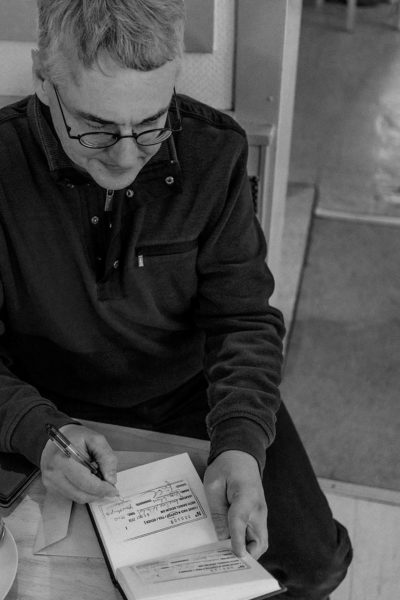 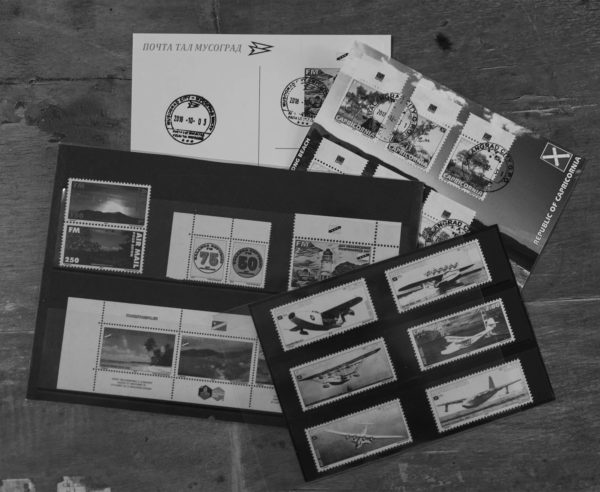