Trees, drawings one paper, 2017 “The trees I am drawing are very similar and different at the same time, like people.” Petra Varl

“Trees, drawings one paper, 2017 It is impossible to know which appeared first, the line on the paper or the thought, or a consciousness of an intention. In a way, the image seems to draw itself through the human hand.” Juhani Pallasmaa

Bathers, painted metal cutouts, Susak, 2016 [Drawings made in one continuous line become cutouts and than I install them in the space, so that the space works as their surrounding, like the background on the paper, only this time there is a context.

Lovers, painted metaI cutout, Krško, 2016 [I like to think that by making drawings I am making myself and others happy. I made a lot of drawings of figures and objects in everyday situations, for example stories about love, to remind me and people around me what matters most in life.] 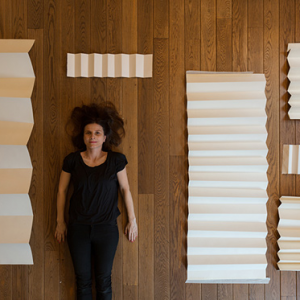 Petra Varl is a visual artist who works in the media of drawing, graphic arts, painting, illustration and installation. She has shown her work in numerous independent and group shows, including the São Paolo Biennial (1996, São Paolo), Museum Mudzarnok (1996, Budapest), MUMOK (2009, Vienna), National Gallery Zaceta (2010, Warsaw). Her latest artbook, Drawings (2015), was selected for the collection of Metropolitan Museum of Modern Art in New York. She is also teaching drawing and graphic arts at the Fine Arts Department at the University of Maribor. She lives and works in Ljubljana.

Petra Varl’s style is certainly one of the more recognizable ones in Slovenian art. The artist succeeded in developing an artistic language, which on one hand preserves a unique personal poetics and on the other consistently testifies about the time and space through which the artist is moving. But Petra Varl’s every line does not merely record a state of affairs but above all of the nascent relationships and relations within society. This is why Petra Varl’s images seem to be personal testimonies that the artist anchors to societal relations and thus directly intervenes in the realm of our everyday life.

In the paintings of the Old Masters of the Italian Renaissance, the trees on the hillsides in the background of mythological scenes and allegories are typically ornate, idealized and flat. There seems to be a particular cultural code that calls not for a realistic portrayal of the peripheral compositional motifs but, instead, consciously embraces simplification and stylization, just as in architecture, cityscapes and landscapes. You need only go to Tuscany, however, for the realization to set in that, seen from a distance, the trees really do look the way they are depicted: regular, as if drawn, and reduced to the essential elements. A tree is one of the most fundamental motifs in art, able to be rendered with a few simple strokes and remain recognizable. This is not surprising, because wherever there are trees, they represent a symbol that is universally understood. And not only that. Trees are often objects of worship and ubiquitous in ancient beliefs and mythologies, for they can live for centuries. The lives of trees were once unfathomable, often admired for their magnificence and defiance. Today, we know they are extremely complex organisms, which are connected to each other and through whose veins flow vast amounts of life-sustaining liquids, and, it is said, they are also capable of communication. They are the indispensable cells of our planet’s lungs.
Trees are also the subject of Petra Varl’s new work. This is not merely because of a fascination with natural history, historical references or ecological awareness, although all of that can be felt as undertones in the series. At the forefront are mainly the repetition of the motif and the artist’s creative process. Varl’s instincts are entirely visual, emotional and experimental. In this way, an extensive series creates a multifaceted discourse on ways of seeing, understanding and perceiving images. The tree images are not identical; each one is different, unique and special, just as trees themselves are. Through her endless repetition of the subject Varl is also alluding to the common saying, “You can’t see the forest for the (individual) trees.” This calls into question the limits of the human perception of things, because our sensitivity to certain impulses diminishes when there are too many of them. The creative process here was similar: at first intuitive, then repetitive. Nevertheless, the artist has followed certain protocols. All the images are stylized in similar ways and contain the same three elements: a trunk, a crown and a shadow. The shadow, always falling in a slightly different direction, at least minimally locates the trees in the space of the picture.
This is in keeping with Varl’s practice up to now: for more than twenty-five years she has been creating mostly stylized figurative drawings in total spacelessness. In previous works, she usually constructed evocative stories with a fairly pronounced narrative, while the Trees series aims at a more radical minimalism. The earlier work, which in fact celebrates the joys of life, was created in an almost comic strip manner, often accompanied by captions that inevitably became the vehicles of the story. While the captions toyed with the multilayered meaning of words and offered witticisms, the stylized drawings were set free from any redundant context and reduced to only a few basic strokes. Although the present series is similarly stylized, the narrative element has mostly fallen away, shifting to a less cognitive and more experiential level. There are no more stories, but only images pointing us to the original intention that led the artist to treat this motif at all – a motif she then elevated to a theme. Varl undoubtedly admires trees and is fascinated by their appearance, strength and resilience. She presents them from her own personal perspective, as incomprehensible but benevolent living beings, which are one of the basic elements of our common culture and our understanding of the environment. At the same time, she wonders just how rational these beings are and how they must see us, people, the self-proclaimed masters of the planet.