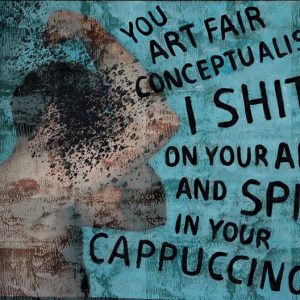 Herzog Dellafiore came to prominence on the art scene in the early 1990s. Although he had a fair amount of success – some solo shows, several group shows – he was disillusioned with the art world, feeling that the art (including his own) lacked meaning or, if there was some kind of meaning, it was superficial and just an excuse to make and sell art objects.

He considered that art had degraded from its height, during the peak years of conceptual art in the late 1960s / early 1970s – with Lucy Lippard’s dematerialisation of the art object – to the back-door return of Greenbergian formalist ideals.

Dellafiore started his own antagonism by making “childish” interventions at private views, thereby publicly insulting artists, gallery owners, curators and anyone else involved in the arts.

This culminated when he (unfairly) accused Bruce McLean of being a neo-formalist. Dellafiore then went under the radar until his unexpected – and now infamous – reappearance in 2005 at the Colony Room Club in London’s Soho.

Public reaction was so severe that Dellafiore went underground again, and this time it seemed as it would be for good. He had had enough of what he perceived as the “rotten, corrupt and fake” art establishment.

“…Colony Club Rooms have been host to some of the world’s most prestigious names in the art world and Mr Herzog’s public disregard for the establishment’s entertainment will not be tolerated.

“The Colony Club takes great pride in any acts fortunate enough to perform and the events on the aforementioned evening were so shocking and tasteless that we would not want to cause offence in reliving the details.” [Extract from Colony Room Club statement released soon after the event]

“The sight of physical assault on a man is not one that would usually evoke a wry smile. However, self professed art expert Herzog Dellafiore awoke from his slumber (last Saturday) at the Colony Room Club and it was difficult not to savour it in parts. One hopes that the anti-art recluse thinks twice before he resurfaces next time. At least one positive can come from the Colony Room Club closing its doors. The likes of Herzog Dallfiore [sic] can no longer frequent the once revered establishment.” [Simon Johnson, May 2005]

But after more recent repeated attacks in the art press by Smith, Sewell and Johnson referring to the 2005 incident at the (now shut-down) Colony Room Club, Dellafiore can no longer accept these defamations and wants to put the record straight once and for all, proposing his version of the events in the most graphic way possible.