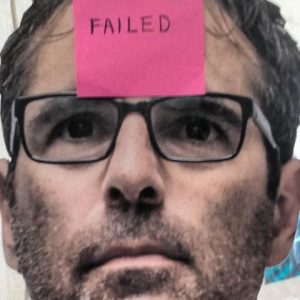 My subject matter is art (objects, artists, institutions) and the search for my position within it. I feel like a devout believer in art, searching for its meaning and trying to work out if I can legitimately call myself an artist, yet at the same time an irreverent sceptic who thinks “What the fuck are those bricks on the floor?”

One of my earliest videos, Amsterdam Fall, was sparked by this dichotomy: I saw Bas Jan Ader’s piece showing him cycling into a canal and decided the best way to find out what it was about was to experience it.

I (attempt to) subvert art institutions using their own tools. I created and printed 2,000 copies of a booklet with the look and form of a Tate Modern exhibition catalogue. I placed these throughout the Tate Modern and expected a reaction – but my booklets had infiltrated the Tate so well that I wasn’t getting one! Frustrated, I sent someone to try to buy a copy from the shop. Initially, the management were apologetic not to be able to find it on their system – but once they realised it was a “fake”, they angrily searched the gallery and threw away all the copies they could find. I lost all my books and had nothing to show apart from a badly filmed video and a few anecdotes but I still believed that I had made some kind of institutional critique whereas in fact it was a childish prank that nobody remembers.

I organise art exhibitions and events that try to seem what they aren’t, curating fictitious group shows in the oddest places, (e.g. Madagascar) each with a London one-day preview show, opening, catalogue, ad etc. as well as mounting ‘genuine’ exhibitions that really take place – as in Graz and Vienna in 2012.

I have organised the Susak Expo Biennale since 2006, it’s an international art event that takes place on a remote Adriatic island, they have all the correct biennale ingredients: international artists, leaflets, catalogues, quarter page ads in Frieze, the only thing that isn’t quite right is that there are usually more artists exhibiting than visitors seeing the show.

I have an alter-ego artist, Herzog Dellafiore, inspired by the surrealist poet Benjamin Péret (who used to publicly insult priests), Werner Herzog and Gustav Metzger. As Herzog, I made a piece in 2006 called 4 quarters, which consisted of four paintings made in proportion to quarter page adverts in Frieze, Art Forum, Flash Art and Art Monthly. The paintings had wording insulting artists and art institutions, The Frieze ad had “You art fair conceptualists – I shit on your art and spit in your cappuccinos” worked into the painting. They all advertised a genuine solo show organised by Tracey Neuls, but once they realised that these paintings weren’t going to help promote designer shoes, the exhibition was immediately cancelled.

I am also a publisher. Under the name Susak Press, I publish catalogues to all the exhibitions I organise (real and fake), artists books for myself and others, and catalogues to proper events (like the Marmite Prize for Painting). As with the ‘Late Modern’ I also publish books that don’t exist, but which have a real ISBN, a cover image which I then put up for sale on Amazon. I once asked my sister to buy a book I’d ‘published’ in this way – when Amazon contacted Susak Press, I told them that the book was out of print -but  once something is out in the net, it proliferates – I have injected a benign online virus, a marker that allows you to trace its progress through the internet’s vascular system. This book is now on sale from many other online booksellers internationally.

I’m interested in the traces, the unknowable realities that are left for future historians – imagining someone, in a few years time, picking up an old copy of Frieze, Flash Art, Art Forum and thinking, what was that Susak Expo, that strange exhibition that took place in Antananarivo, Madagascar (I didn’t know they had a Museum of Contemporary Art there, and who was Herzog Dellafiore?).

I organise events as both curator/organiser and artist: I not only often show work, but also consider these events themselves part of my art practice. The exhibitions play an important part but are not the main part; I like to create a framework and then ask artists to help me make it happen as a collaboration, so that we’re all both contributors and creators.  The whole includes the shared experiences, the putting up and taking down of the show, the politics, discussion and after the exhibition, the catalogue and other art peri-phenomena, like adverts, flyers, invites etc.

I am interested in the relationships and interactions between the artists involved, (not in a Relational Aesthetics way although I do often make coffee for people and organise Osman’s Café once a month).

Since working on the Susak expo Biennale, what could be termed my more traditional ‘sculptural’ practice has led to the exhaustive use of orange wheelbarrows (the island’s only means of transport is the wheelbarrow – painting them a uniform orange was my un-asked for intervention – they now populate the entire island as movable land-art).

My video works that often take the form of a conversation or dialogue. These conversations usually start with a script or a plan but they are not strict and are free to change direction. Sometimes these conversations are between me and a doppelganger.

In Don’t Fucking Lucy Lippard Me, Maxine Peake who plays the part of Herzog Dellafiore interviewed by Daniel Devlin followed the script quite closely, but in In conversation With Socrates (not the philosopher but the captain of the 1982 Brazil football team), the only plan is that we would have a socratic conversation about what is beauty in football. And when I had my conversation with Bruce McLean, the plan was to promote The Dan Devlin Show, I had a script but he didn’t read it.

I’ve been called a postmodern naïf, a conceptual provocateur … and many other things. Maybe I’m just a fraud.