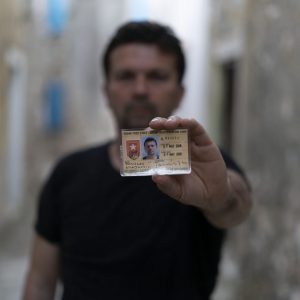 Tomislav Brajnović was born in 1965 in Zagreb. He completed his first year of study in fine arts in Den Haag, but he graduated in Zagreb, from the Academy of Fine Arts, in 1999, under professor Đuro Seder. In 2003, he earned his MA in fine arts at Central St Martins College of Art & Design in London. Brajnović teaches New Media, City Mapping and Recontextualisation at the Rijeka Academy of Applied Arts.

In time of end of history ethical crisis it is unthinkable to engage in anything else but ethics. In this endeavour, I move from art towards life. I abandon forms (illusions) and emphasise the contents instead; I live the answers to the questions I pose as an artist. This emphasis has a form, but it becomes less visible; its effect disappear, there are no embellishments; the message stands out, like a naked medium. In this ‘digital era’ my main concern is the redefinition of art with the idea that digital media’s sterility has snuffed out content and that’s what is seen as the ‘death of art’, the disappearance of the unclear, the magic of the media and touch of the hand. The future of art does not lie in a new forms and ambiguous questions, but in a true content, it is time for clear answers. Such a dramatic conclusion derives from the awareness that the technological man is striving towards ‘general knowledge’ and ‘direct link’ to the digital. I see it as a critical moment of losing our humanity, space of free will and resistance. The only artistic discourse, as I see it, is the race between man (artist) and artificial intelligence to absolute knowledge.